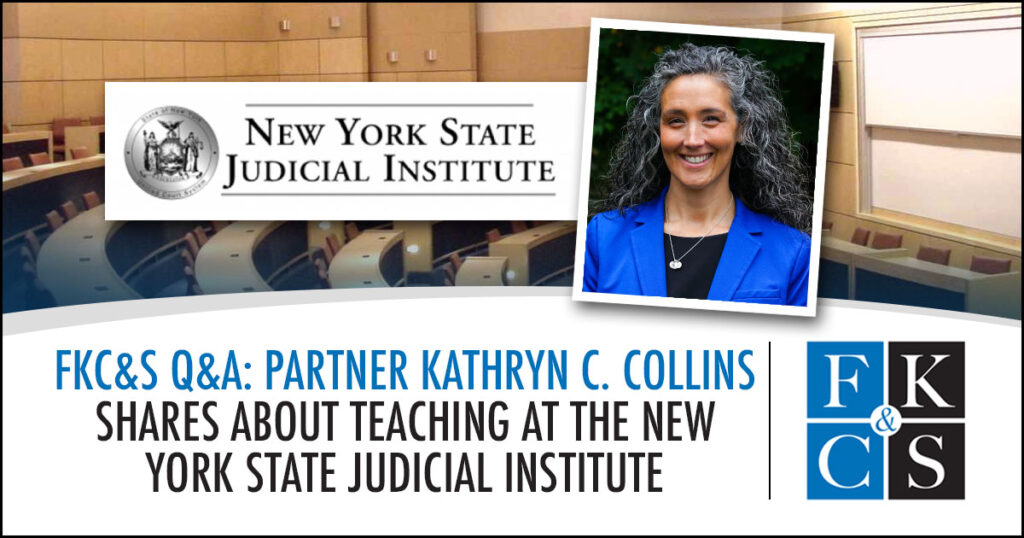 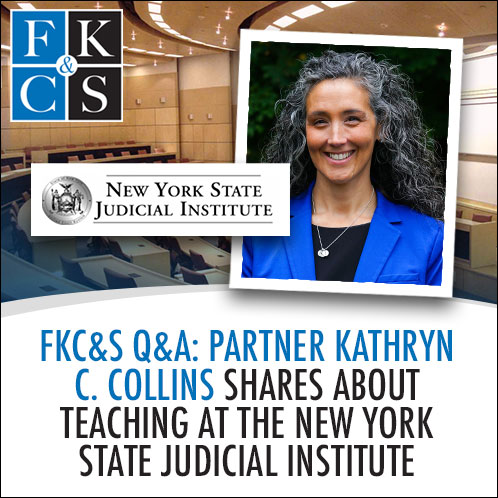 For several weeks this fall, Feldman, Kleidman, Coffey & Sappe LLP (FKC&S) Partner Kathryn C. Collins shared her time and expertise as an educator through The New York State Judicial Institute. In the following Q&A, she shares about her experience and learnings.

You’ve recently had the opportunity to help teach others, through The New York State Judicial Institute, about trial practice. How did you get involved with this opportunity?

A colleague, who also happens to be a plaintiff’s lawyer, asked if I would be willing to make a several week commitment to assist him and a rotating panel of seasoned judges in educating New York State jurists who, either due to the COVID pandemic or due to being newly elected, had little to no experience in presiding over a civil jury trial. Given the panel of judges who had already agreed to participate, coupled with how experienced this plaintiff’s lawyer is, I jumped at the chance knowing that I, too, would learn a lot during this process.

Was this your first time teaching others in the legal field?

I have taught continuing legal education (CLE) courses in the past to other lawyers on varying topics, most recently on the Loss of Chance Doctrine, but this was going to be my first opportunity assisting in teaching, and of course learning from, judges so I jumped at the chance! I have found in my past experiences that while the preparation needed for teaching can be daunting, especially when your day job keeps you incredibly busy, at the end it is always so much more rewarding than you had anticipated. I also think it is a privilege to be able to help others in my profession and there is no greater compliment, in my mind at least, than when someone who took my CLE says to me ‘you really gave me something to think about’. That’s what it is all about, isn’t it? Getting others to contemplate things a bit differently then they normally might.

Who were you teaching over the last seven weeks? Was it one group of students that met over seven weeks or multiple classes?

The way the Judicial Institute wanted the program laid out was to have seven distinct modules, each of which focused on a different portion of the civil jury trial. Judges and their court personnel could sign up for as many or as few modules as they wanted. That way, if there was a particular portion of a trial that a judge or their law secretary was most interested in, they could commit to only that module if they wanted to. Both in-person and virtual attendance were permitted to maximize accessibility, and we had an amazing turnout for each module. Each module was taught by a plaintiff’s lawyer, a defense lawyer and two seasoned jurists. We would perform simulations involving issues that the new trial judges were likely to encounter in their courtrooms.

Can you share more about what your focus was and some of the topics you covered?

We had seven distinct modules, and they ran in chronological order. The first module dealt with pre-trial matters. This included motions in limine, which were based upon issues such as the admissibility of prior convictions and rulings related to the use of examinations before trial (EBTs) at trial. We also had oral arguments on these motions, as well as on the issue of whether the trial should be unified or bifurcated and had discussions regarding the timing of expert witness disclosures. The second module dealt with jury selection and went through issues that arise during voir dire (attorney questioning of potential jurors), as well as potential issues with opening statements. Module three dealt with proper examination of a witness, as well as sidebars and allowing records to be made during trial, and ways to ensure that the record is effectively and properly protected. Module four was based upon appropriate evidence and evidentiary issues that arise during a civil trial. The fifth module dealt with handling a trial involving a pro-se litigant, or a litigant who did not have an attorney representing them as well as contempt hearings during a trial. The sixth module involved curative instructions, expert damages witness testimony and use of exhibits during such testimony, as well as use of technology in the courtroom post-COVID and remote witness testimony. The final module dealt with how to handle a charge/verdict sheet conference, as well how to take a verdict and deal with errors on the verdict sheet after it has been given to the jury.

Is there a lesson or piece of advice that stood out most to you?

We would have each of the two judges who were present for each module make their own rulings and quite a few times the rulings differed, which led to discussions about what were the important factors that each judge considered prior to making their ruling. It was quite fascinating to see how often these seasoned judges differed in opinions and to hear their explanations as to why.

Did you learn anything new while teaching?

I always learn new things when teaching and this certainly was no exception. I gained insight into how and why some judges rule the way they do on various issues, which of course as a trial lawyer could be invaluable when making arguments in future cases. I think another thing that resonated with me throughout this was the notion that the judge who is presiding over my trial may be just as anxious about the trial as I am, which in all honesty I had not really contemplated before.

As a seasoned attorney, what is your main hope for the newer jurists you have been guiding?

Well, I am not sure that I am ‘seasoned’ but I did try to impress upon the jurists that their goal should be to let the attorneys try their cases and, when an issue arises, to permit both attorneys the opportunity to be fully heard and to give real thought to the decisions that they make, because the goal is to provide everyone, the plaintiff, defendant and the lawyers, with the opportunity to have a fair trial from the beginning to its conclusion.

For 36 years and counting, Feldman, Kleidman, Coffey & Sappe LLP has been dedicated to advocating for the legal rights of its clients. Based in Fishkill, NY, its attorneys have successfully tried cases at all levels of state and federal courts throughout the Hudson Valley and Capital District. The firm specializes in the practice of personal injury law and professional liability defense. For more information, visit www.fkcs.law or call (845) 897-5199.

Established by Judiciary Law § 219-a, the New York State Judicial Institute is a statewide, year-round center for judicial education, training, and research designed to enhance the quality of the New York State courts and ensure the judges and justices of the New York State Unified Court System set the standard for judicial excellence around the country. To accomplish our mission and make sure the judiciary remains current on developments in the law as well as other disciplines affecting the law, the Judicial Institute focuses much of its programming on emerging trends and cutting-edge issues, thus fostering a “think tank” atmosphere to help judges fashion solutions to issues facing the legal system. The Judicial Institute also provides continuing legal education programs to court attorneys, support magistrates, and court-related personnel. Another goal of the Judicial Institute is to provide a framework for facilitating an improved dialogue between the Judiciary, the practicing bar, and the public.