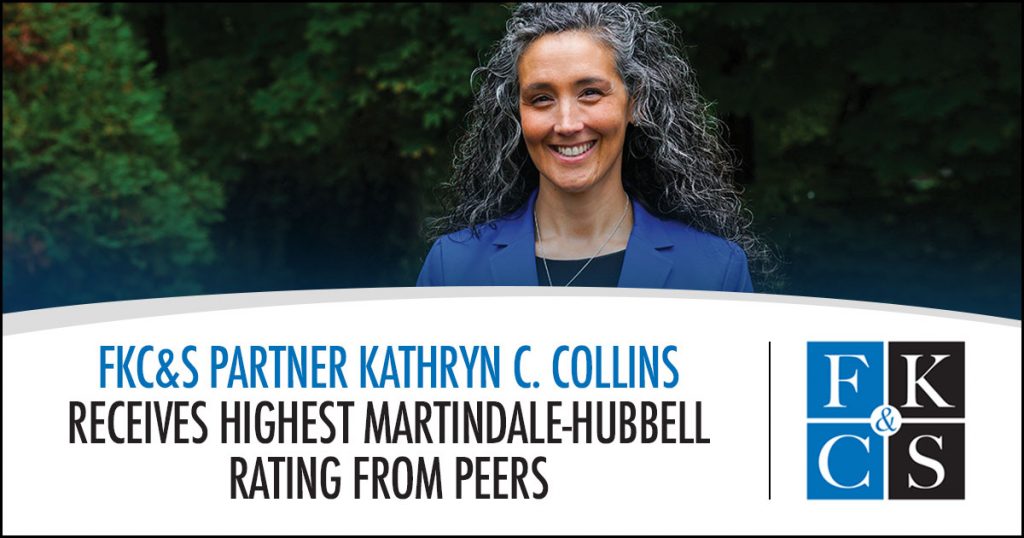 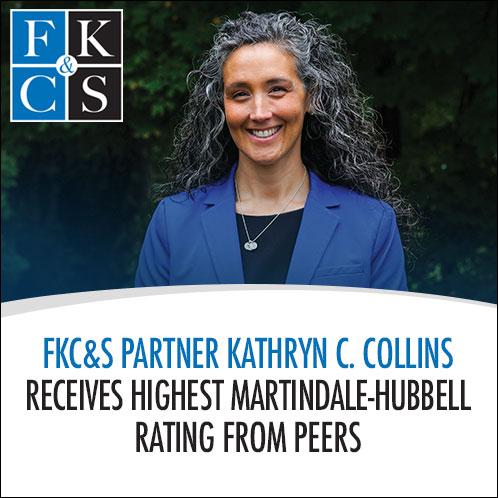 Feldman, Kleidman, Coffey & Sappe LLP (FKC&S), a Fishkill, NY based law firm specializing in personal injury law and professional liability defense, announced that Partner Kathryn C. Collins has received an AV Preeminent® Peer Rated Attorney designation through Martindale-Hubbell, the most reliable and sought-after peer rating standard in the legal industry for more than 130 years. To achieve this rating, a substantial amount of a lawyer’s peers must rank them at the highest level of professional excellence for their legal knowledge, communication skills and ethical standards. Collins joins an elite group of attorneys who have been rated highly by their peers as having “Very High Ethical Standards” and an “A Grade” (4.5 or higher).

“I am incredibly honored to receive an AV rating from my peers,” said Collins. “To be ranked among some of the very best in my field for the work I love to do means the world.”

Specializing in medical malpractice, professional liability and general liability litigation, Collins is seasoned in the defense and counseling of physicians, dentists, podiatrists, mental health providers, hospitals and nursing homes. Her work as a liability lawyer has also involved representing attorneys and others in professional malpractice claims. She has tried multiple cases to verdict in courts throughout New York State and has successfully defended cases involving medical malpractice, general liability and construction site accidents in both Federal and State Courts.

Collins graduated cum laude from the State University of New York at Purchase with a bachelor’s degree in English and received a Juris Doctorate from Brooklyn Law School in 2001. Before joining the award-winning legal team at FKC&S in 2016, she spent years as a partner at a reputed law firm in New York City. A member of the New York State Bar Association and the American Bar Association, she is admitted to practice in the State of New York, the U.S. District Court, Southern, Northern and Eastern District of New York, the U.S. Court of Appeals, Second Circuit and the United States Supreme Court.

“Kat is truly deserving of this outstanding recognition,” said Jeffrey M. Feldman, partner at FKC&S. “Our team is grateful to collaborate with, learn from and celebrate her as she continues to raise the bar for everyone in our field.”

Founded in 1868, Martindale-Hubbell has evolved into a leading global network of more than one million lawyers and a portfolio of websites and tools designed to connect lawyers and buyers of legal services. To determine ratings, the company conducts a thorough review of attorneys through a secure online survey where a lawyer’s ethical standards and legal ability in a specific area of practice is assessed by their peers. Once the review process is complete, an attorney may receive one of three Martindale-Hubbell® Peer Review Ratings™. Receiving an “AV” rating means that an attorney is being recognized for achieving the highest of professional excellence, skill and integrity.