What You Need to Know About Loss of Chance Doctrine 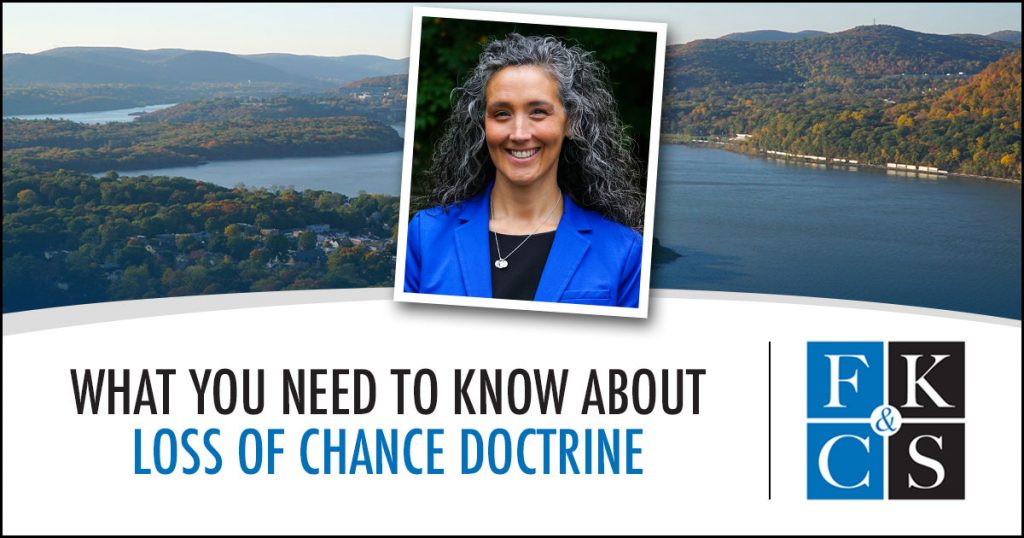 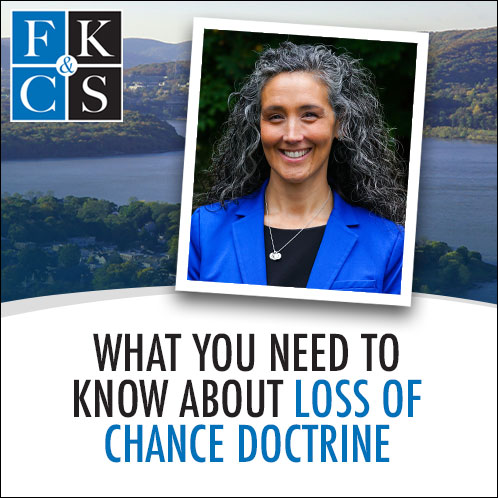 On April 20, Feldman Kleidman, Coffey & Sappe LLP (FKC&S) Partner Kathryn C. Collins, Esq. presented during a virtual event co-hosted by the New York State Academy of Trial Lawyers and the Albany County Bar Association, titled “Medical Malpractice’s Loss of Chance Doctrine: When to Use It and How to Lose It.” Well-versed in this area of law, Kathryn and her co-presenter, Alan W. Clark, Esq., discussed the loss of chance doctrine in medical malpractice cases, including recent lost chance case law (delayed diagnosis of cancer and general medical conditions), elements of prima facie case, using expert testimony, jury charges and voir dire to more than 600 attendees. The presentation is available to watch here.

What is loss of chance doctrine?

In some medical malpractice cases, plaintiffs can seek compensation if they believe a doctor’s negligence deprived them or their loved one of a better outcome. Unlike cases where proof is needed to show that a specific action or set of actions caused a certain negative outcome (i.e., injury, death, etc.), this occurs mainly in cancer and general medical cases that beg the question: “Without this delay/omission, would there have been a better result?”

Here’s an example: A plaintiff claims that a delayed diagnosis of breast cancer impacted a patient’s prognosis, arguing that if they were diagnosed eight months ago at stage one instead of stage three, they would have had a better chance of recovery, perhaps with a different or reduced treatment plan.

How loss of chance established?

There may be proximate cause if it can be determined that a negligent act or omission more likely than not deprived the patient of a substantial chance of a better outcome, or increased the injury, pain and suffering or required additional treatment options to be tailored to the case.

To prove this, the plaintiff needs to present sufficient medical evidence so that a reasonable person might conclude that it was more probable than not that the defendant’s departure was a substantial factor in causing the patient’s injury. Evidence of this is presented to the jury by virtue of plaintiff’s medical expert.

If loss of chance is proven, how is compensation determined?

If a settlement is not reached, a jury determines compensation by considering factors such as economic damages caused by further treatment and the value of the patient’s diminished outcome or diminished chance of a cure due to this claimed ‘loss of chance’ theory. In New York this type of compensation is not separately itemized on a verdict sheet and is lumped in together with economic damages such as past and future medical care, as well as past and future pain and suffering.

What is the state of loss of chance doctrine in New York?

In the United States, 24 states have adopted some version of the loss of chance doctrine, but only a few have limited its application. While New York has seemingly adopted this doctrine when it relates to medical malpractice matters, there is no consistency among the Appellate Division courts as to how it should be utilized, whether there should be alteration of jury instructions and what a frequently used phrase, ‘substantial possibility’, actually means. The highest court of New York, the Court of Appeals, has yet to weigh in on whether the loss of chance doctrine permits an alteration of the pattern jury instructions relating to proximate cause or whether loss of chance is an actual feasible theory of negligence, as outlined in their decision in the Wild v. Catholic Health System, 21 N.Y.3d 951 (2013) matter. As such, litigators are left to unravel the inconsistent rulings handed down by the various appellate courts throughout the state. With such ambiguity comes challenges for both sides in these cases.

As it stands in New York, to be considered ‘substantial’, the loss does not have to be greater than 50 percent, nor does it have to be quantified to reflect the percentage of loss, so long as it is not slight and the evidence reasonably shows that there was a diminished chance or possibility of a better outcome. Some appellate division courts have permitted the addition of ‘substantial possibility’ to the traditional proximate cause charge, however only one court has attempted to define what that actually means (Mortensen v. Memorial Hospital, 105 A.D.2d 151 (1st Dept. 1984). In the Mortensen case, the Court held that substantial possibility meant a ‘significant’ or ‘realistic’ possibility.

Let’s go back to the example we gave earlier. If, hypothetically, it is established that the delay in a diagnosis of breast cancer decreased a patient’s chance of survival by 30 percent, theoretically they should be compensated for that specific percentage of loss. Because New York State has not clearly defined the loss of chance doctrine, there has been an all-or-nothing approach applied to these cases, sometimes leading to overcompensation by juries as these damages are not clearly laid out separately in the verdict sheets.

In the absence of a sturdy framework, there has been an increase in attempts to utilize this theory by plaintiff lawyers in various types of medical malpractice cases, arguing that claimed departures by defendant doctors, mostly related to delays in diagnosing various conditions, led to decreased chances of a better outcome and increased pain and suffering for their clients. There seems to be a trend of attempts by plaintiff lawyers to alter the standard proximate cause charges to include language that aims to, at the very least, confuse the jury as to what the burden of proof is and effectively diminish the burden from substantial factor to some lower standard of substantial possibility.

For defense lawyers, it is important to be well versed in the facts of the cases that plaintiff lawyers traditionally cite to as the basis for such alterations so that factually one is able to distinguish the facts of their current case from those that plaintiff will continually reference (Kallenberg v. Beth Israel Hospital, 45 A.D.2d 177 (1st Dept. 1974); Wild v. Catholic Health Sys., 21 N.Y.3d 95 (2013); D.Y. v. Catskill Regional Med. Ctr., 156 A.D.3d 1003 (3rd Dept. 2017); Jump v. Facelle, 275 A.D.2d 345 (2nd Dept. 2000);). If armed with the facts of the underlying case, it will be more difficult for your adversary to cherry pick certain phrases that the appellate division may have used and relate them to the viability of a loss of chance charge alteration. Further, the most effective way of evidencing the purely speculative nature of some of these claims to both the jury, and the Judge who will be ruling on the proposed jury charges, is through exacting cross-examination of the plaintiff’s medical expert.

For over 36 years, doctors and hospitals in the Hudson Valley, NY have trusted FKC&S to represent them in highly technical medical malpractice cases (professional liability defense). Our medical malpractice defense attorneys include some of the most experienced trial attorneys in the region who are skilled at understanding the medical complexities that often surround a case, including loss of chance doctrine. At FKC&S you will always meet with an attorney and can feel confident knowing that they will be with you every step of the way. Call us for a free consultation today (845) 897-5199.