36 Years and a Lifetime of Memories 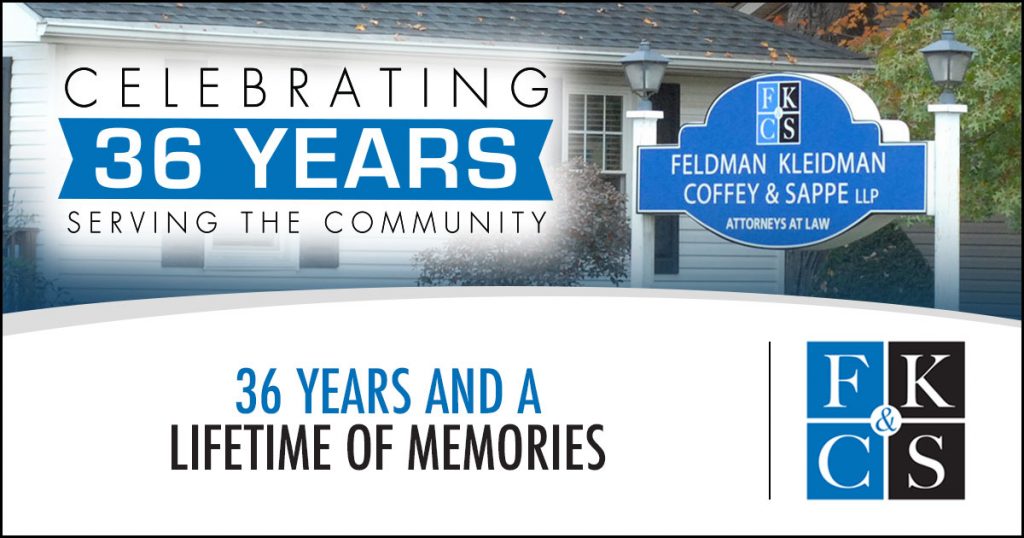 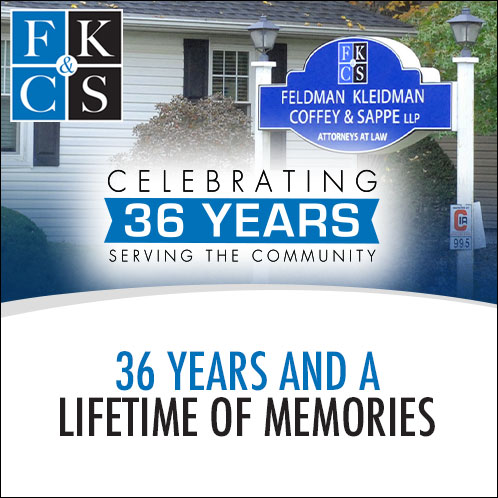 Thirty-six years ago this month, Jeffrey M. Feldman and Paul S. Kleidman founded what is now called Feldman, Kleidman, Coffey & Sappe LLP (FKC&S). After working together at another firm for years, they embarked on their new adventure in February 1986, renting the first FKC&S office just down the road from where the firm is located now in Fishkill, NY. Committed to ensuring that every client receives personalized attention from expert attorneys who can walk them step-by-step through the legal process, Feldman and Kleidman set a list of intentions for the firm.

“We created what exists now with several goals in mind,” said Feldman. “First, we wanted to create an environment where the same attorney would see a client’s case through from beginning to end. We also wanted to create an atmosphere where people wanted to come to work – a collaborative environment where everyone felt like they were on the same team. Thirdly, we wanted to be present for our families. We would pitch in for each other, so if I had something going on like a deposition, Paul would do it for me so I could go to my kid’s little league game and vice versa. The fourth thing was to be more involved in the community from a charitable giving point of view.”

In the years since its founding, FKC&S’s team has grown substantially, bringing on talented, passionate and dedicated professionals who have helped achieve countless wins for clients. A testament to its incredible team, FKC&S is the only litigation firm between Albany and Westchester selected as a BEST LAW FIRM by U.S. News & World Report for 13 consecutive years, one of many professional and community accolades FKC&S has earned. Outside of the courtroom, staff have consistently given back to the community through involvement in a variety of organizations, including Family Services, Hudson Valley Hospice, Abilities First and more.

“We are grateful for 36 wonderful years of serving our clients and community,” said Feldman. “I’m proud to say that together, the firm has upheld the values that Paul and I committed to from the start, and we will do so for many years to come.”

The FKC&S team continues to honor the legacy of Paul Kleidman, who sadly passed away in 2006 after a long battle with pancreatic cancer. Earlier this month, FKC&S Partners Jeffrey M. Feldman and Robert R. Sappe, Scheduling Coordinator Jeanne Marzullo and Office Manager Patricia Porcaro shared their memories of Paul in a blog post, and the response was overwhelming. He was beloved by so many. Here are a few more stories to leave you with:

“It is hard for me to remember when I first met Paul or what the circumstances were other than to say that we were both representing defendants in a medical malpractice action. I instantly liked Paul. He was so down-to-earth and funny. I always welcomed a case where Paul and I were representing co-defendants. It was always a warm and cooperative working relationship to the extent the facts allowed. Trying a case with Paul was also a pleasure. A very fine attorney, he always kept the mood light regardless of the pressure of trial. He consistently complimented my suits. I recall distinctly him saying that I was the only attorney he knew that could wear a pink suit to court and pull it off. He was a flatterer for sure but one of the favorite lawyers I have met in this profession. Just a great guy!”

“I had several cases with Paul, all settled. But during my last case with him, I deposed a doctor Paul represented. Paul had been diagnosed with cancer some time before. He, of course, never let on about the prognosis. His courage was breathtaking. Every break during the deposition was filled with us ribbing each other. I had a good day and was able to do a real number on this particular doctor. Throughout the deposition, Paul would attempt to rephrase my questions to help his client. I said to him, “If the Giants had this effective coaching, we’d be headed to the Super Bowl.” Nonetheless, after complementing me on the deposition, Paul still asked, “So are you going to let me out of the case?” I laughed, but Paul didn’t. While we eventually settled the case, it was another example of how disarming Paul and his charm and sense of humor could be. He was an extraordinarily talented lawyer who fought hard in defense of his clients. Over the years, I’ve met many medical malpractice lawyers who practice in the Mid-Hudson region – it’s a relatively small community made of strong-willed advocates. One thing we could always agree upon was that Paul Kleidman was one of the most wonderful lawyers we ever came into contact with.”