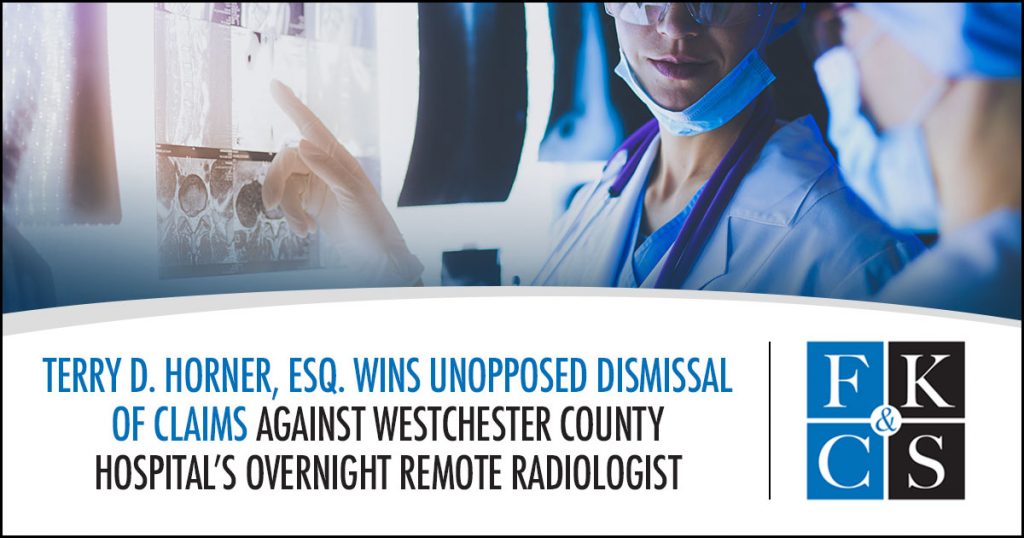 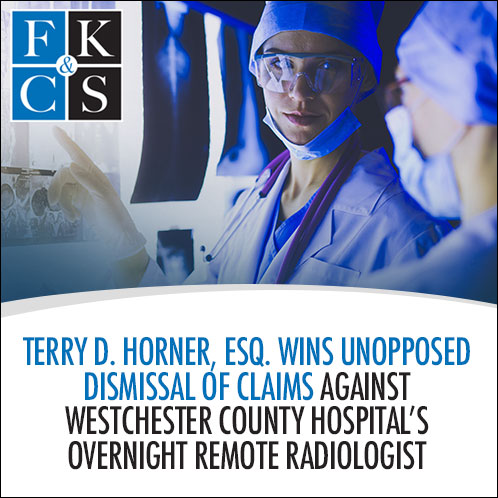 In a case alleging a failure to timely diagnose colon cancer, Terry D. Horner recently won a dismissal for a radiologist and his employer, who provided remote overnight radiologic interpretation services for a Westchester County, NY hospital emergency department (ED). In December 2014 the patient, a 33-year-old woman, presented to the ED in the middle of the night complaining of significant lower abdominal pain — left and right — with nausea and retching. The ED physician on duty ordered a non-contrast computerized tomography (CT) scan of the abdomen and pelvis.

Feldman, Kleidman, Coffey & Sappe LLP’s (FKC&S) client interpreted the study and rendered a “preliminary” report, noting a short segment of wall thickening in the proximal descending colon, which he suggested could be localized colitis. He saw no other findings of concern, and no evidence to support including colon cancer as a differential diagnosis. He recommended that the possible colitis finding be correlated with any left upper quadrant pain. The ED physician concurred with the interpretation, including the conclusion that colon cancer need not have been considered in the differential diagnoses. The patient was discharged from the ED and told to follow up with her primary care provider or gynecologist.

In accordance with ED protocol, the CT study was independently interpreted later that same morning by a staff radiologist at the hospital, who reached the same conclusions as FKC&S’s client. Because of its “preliminary” nature (i.e., subject to an independent interpretation by another radiologist) the report prepared by FKC&S’s client was not incorporated into the patient’s medical record and was not seen by the succession of physicians and providers the plaintiff saw in the ensuing two and a half years.

In May 2017, the patient was diagnosed with stage III colon cancer and underwent a hemicolectomy. Her surgeon told her that the cancer had likely been stage I in December 2014. The patient thereupon sued almost every provider she had had contact with in that period (including the hospital radiologists), claiming each could have but failed to diagnose the cancer.

FKC&S filed a motion for summary judgment, arguing that a radiologist has a limited duty of care, which does not engender a general duty to schedule further tests or independently diagnose a patient’s condition. It was argued in addition that a non-contrast CT of the abdomen is not in any event diagnostic for colon cancer, which would have required different imaging or tests.

FKC&S also argued that their client’s report could not have been a proximate cause of any subsequent failures to diagnose colon cancer, because no providers except the ED physician and the hospital radiologist — both of whom saw it the day of the ED visit — ever saw the report.

In responding to the motion, the patient’s attorneys explicitly declined to oppose FKC&S’s motion, stating that there was no proximate cause. The court thereupon granted the motion, dismissing all claims against FKC&S’s clients.