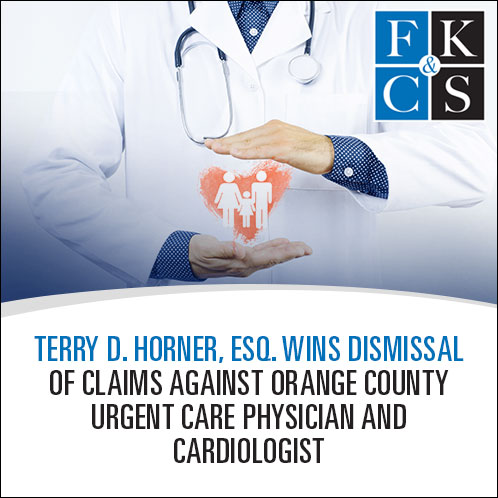 Terry D. Horner recently won a dismissal for an Orange County, NY family medicine physician and a cardiologist in a case involving a patient who consulted them for chest pain and other

The patient was a 52-year-old, overweight, non-smoking woman with a family history of heart disease, who had felt chest pain the previous afternoon, took a decongestant, then felt tightness in her chest. Attributing the tightness to the decongestant and hunger, she ate and went to bed.

The next morning the chest pain started again, although it came and went. The patient took Tums and Pepto-Bismol, which were usually effective, but they did not provide relief. In the afternoon she took some Zantac and went to an urgent care where she was seen by a family medicine physician. The patient believed she was suffering from heartburn, but the physician thought the symptoms could be cardiac in origin and immediately arranged for her to see a cardiologist in the same office. Despite this, the patient asked to see a gastroenterologist instead, but ultimately agreed to see the cardiologist.

The patient told the cardiologist that her chest pain felt like “pressure” radiating to both arms and into her neck. The cardiologist felt that the family history of heart disease was significant; his differential diagnosis was that the chest pain was cardiac-related, and he wanted the patient to go to the emergency room by ambulance for troponin testing, which would confirm heart damage. He told her that she might die if she did not go to the emergency room.

The patient went home, went to bed, and died in the middle of the night. The patient’s husband alleged that FKC&S’s clients were negligent in not convincing or forcing the patient to go to the emergency room.

The court agreed with the arguments in FKC&S’s summary judgment motion and, finding the plaintiff’s opposition to be speculative hindsight and contrary to the evidence, granted the motion and dismissed all the claims against FKC&S’s clients.