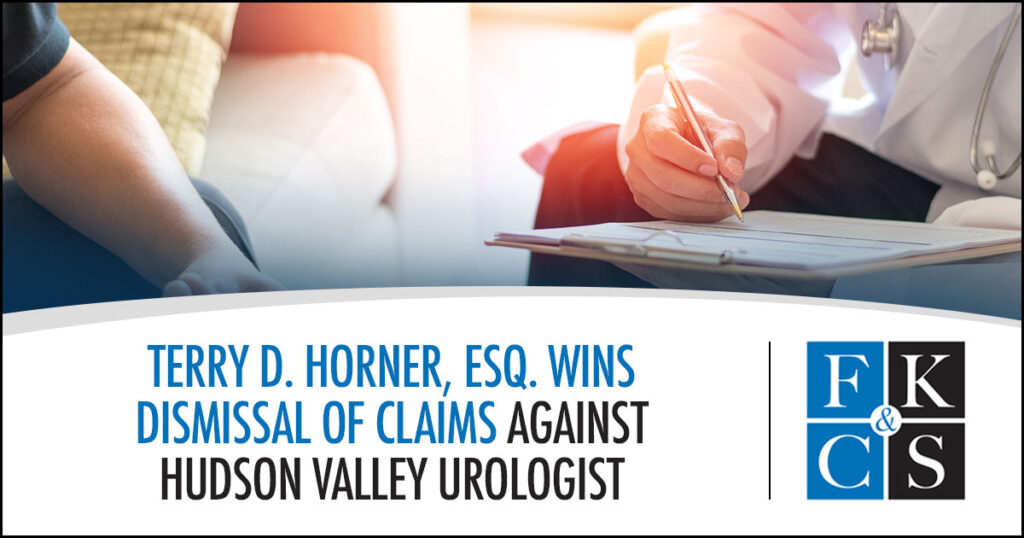 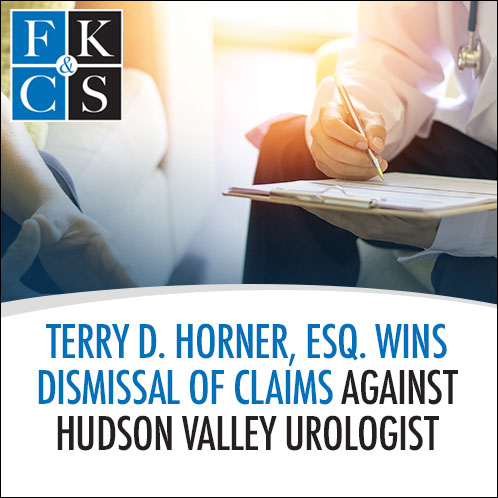 Terry D. Horner recently won a dismissal for a Hudson Valley, NY urologist, in a case involving a then-74-year-old man with a history of prostate cancer, stroke, COPD with inhaler, type 2 diabetes, gastric ulcer with surgery, chronic back pain, arthritis, depression and erectile dysfunction with implant.

The patient had presented to the emergency department of a local hospital complaining of blood in his urine. He was diagnosed with a UTI or bladder infection, given a prescription for Keflex, and told to follow up with Feldman, Kleidman, Coffey & Sappe LLP’s (FKC&S) urologist client and with his primary care physician (PCP).

FKC&S’s client ordered a urine culture, which was negative for malignant cells. The urologist also ordered an ultrasound, which revealed no evidence of kidney stones or an enlarged kidney. FKC&S’s client thereafter performed a cystoscopy, which revealed spider veins of the posterior and lateral walls of the bladder. The plaintiff was placed on ciprofloxacin and instructed to follow up. One week later, the patient told FKC&S’s client that his PCP had also prescribed ciprofloxacin. The urologist strongly emphasized that the patient should have another urine culture before taking additional antibiotics, gave him a script for urine culture and told him to return in four weeks.

When the patient did not return as directed, FKC&S’s client called him. The patient terminated the relationship, saying he did not need to be “treated like a child.”

After suit commenced, the patient’s attorney repeatedly failed to serve a proper “bill of particulars” specifying the claim—the alleged negligence of FKC&S’s client, and the injuries caused thereby. Following multiple failures by the patient’s attorney over four years to comply with court orders directing service of a proper bill of particulars and discovery responses, the court precluded the patient from proving his claim of negligence and injury. FKC&S thereupon moved for summary judgment, seeking dismissal of the complaint on the ground that the patient could not prove a prima facie case against FKC&S’s client because the patient was now barred from offering any medical evidence in the case.

In opposition, the patient argued that he had described the claim as best he could and admitted that he had been unable to find a physician to support the filing of a certificate of merit, which is generally required to support the filing of a medical malpractice case. The patient also argued — improperly — that the prior motion by FKC&S’s client that resulted in the preclusion order had been wrongly and untimely made. The court rejected this argument.

After reviewing the patient’s repeated and protracted failures to provide proper responses voluntarily, and to comply with court orders requiring him to do so, the court granted FKC&S’s motion to dismiss the complaint.