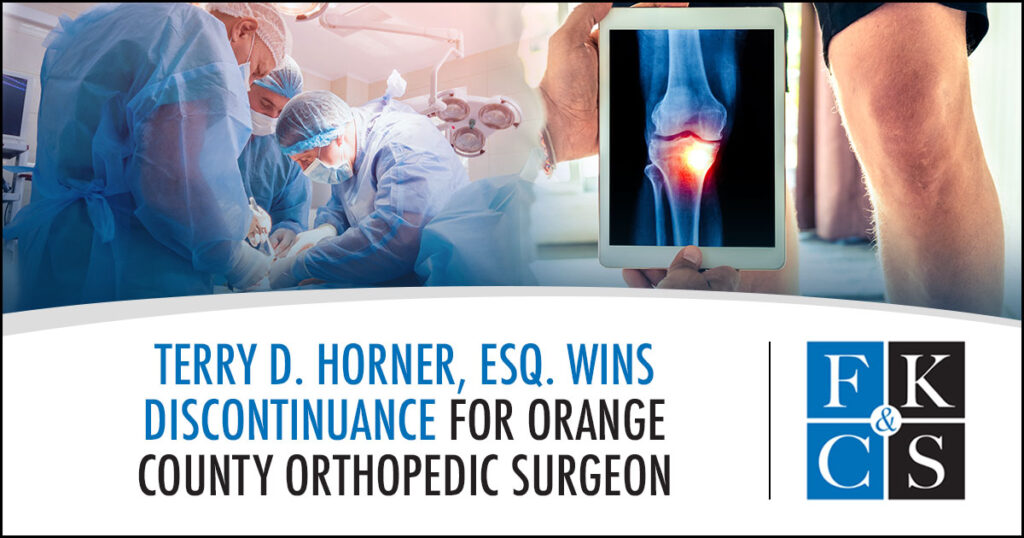 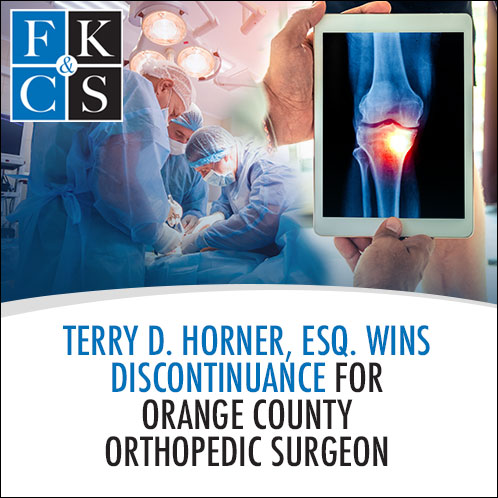 Terry D. Horner, Esq. recently obtained a discontinuance against an Orange County orthopedic surgeon after a plaintiff claimed that his bilateral total knee replacement surgeries were negligently performed and had to be redone by another orthopedic surgeon.

The plaintiff was a 60-year-old man with a six-year history of knee complaints for which he saw Feldman, Kleidman, Coffey & Sappe LLP’s (FKC&S) client and other orthopedists. Three years before the bilateral total knee replacements, FKC&S’s client had performed a partial right knee replacement, without problems. The plaintiff’s left knee then began to bother him as well.

Three years later, after detailed discussions with FKC&S’s client, the plaintiff elected to undergo bilateral total knee replacements. The procedures were performed without difficulty or incident, and the plaintiff’s immediate post-operative course and rehabilitation were normal.

For several months after the surgery, the plaintiff had various complaints of continuing general pain, night pain and stiffness after sleeping or sitting for a time. There was no instability in his knees. Because of his complaints of back pain radiating down both legs, and inability to sleep comfortably, FKC&S’s client ordered an MRI of the lumbar spine, which revealed disc bulges, arthritis and a compressed nerve, which was a possible source of the radiating pain.

At some point the plaintiff complained that his knees were “clicking,” which our client considered normal. When the plaintiff completed physical therapy, he had full range of motion, normal gait and did not require any assistive devices. Despite this, the plaintiff claimed that his pain and stiffness continued for more than a year, at the same time that multiple visits with a podiatrist recorded no complaints of knee instability.

More than a year after the bilateral knee replacements, the plaintiff sought a second opinion from another orthopedic surgeon, because his knees were still “clicking” and felt unstable. After an evaluation, plaintiff underwent a revision of the left knee joint, which involved placing a constrained condylar knee component to reduce the femoral-tibial joint space so there was less “play” on flexion and extension. The right knee was not revised because the other orthopedic surgeon found it “not terribly symptomatic.”

FKC&S filed a motion for summary judgment seeking dismissal of the plaintiff’s claims against FKC&S’s client, arguing that the total knee replacements had been performed within the standard of care, and that nothing he did or did not do engendered the need for the subsequent revision of the left total knee replacement. Based on the strength of the arguments in the motion, including the expert opinion of an orthopedic surgeon, the plaintiff decided to voluntarily discontinue the case against FKC&S’s client, thereby obviating the costs and risks of a trial.