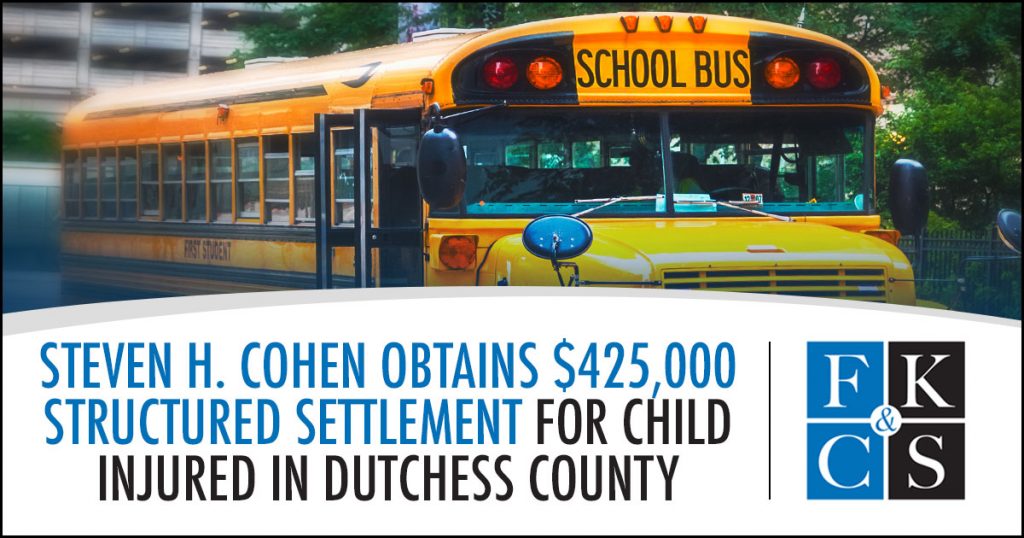 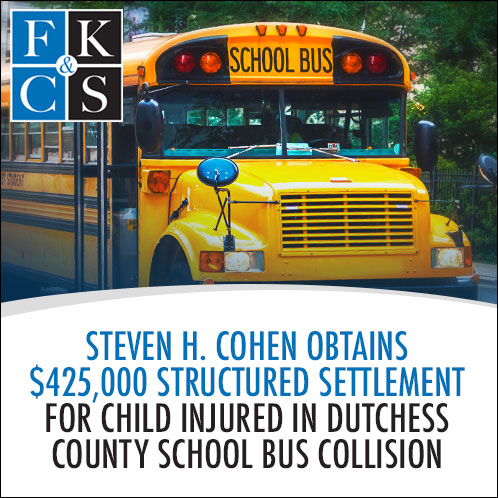 On March 4, 2019, Feldman, Kleidman, Coffey & Sappe LLP’s (FKC&S) client was driving her husband and 11-year-old daughter to a gym for their daughter’s softball workout. The child was sitting in the back seat and was not wearing a seatbelt. As they traveled on Overlook Road in the Town of LaGrange, a bus from Arlington Central School District failed to yield the right of way on McAllister Drive and entered Overlook Road. A crash ensued and the young girl struck her head on the back of the seat in front of her, sustaining a deep laceration on her forehead into her right eyebrow. She was sutured at the hospital and then followed up with a plastic surgeon for revision and laser surgery.

The insurance carrier argued that the crash was partly the mother’s fault and that, had the girl been wearing a seatbelt, there would have been no injury. Committed to achieving optimal legal results for FKC&S’s clients, Steven H. Cohen obtained a $425,000 settlement before trial.

Steve obtained this settlement by doing several things. First, he obtained the video from inside the bus, which showed that the driver had barely slowed down for the yield sign as he entered the roadway. This was very helpful given that the bus driver insisted, even at his deposition, that he had fully stopped the bus before entering the intersection. Clearly, he had not.

Second, Steve ordered a narrative report from the treating plastic surgeon addressing causation and permanency and exchanged that with the defense counsel and the defendant’s insurance carrier. Then he set up a mediation so a neutral party (not Steve or the defense lawyer) could give an opinion as to the value of the case. This can go a long way to changing the mind of an insurance adjuster as to value.

These key steps showed the insurance carrier that the FKC&S team was serious and ready for trial. Preparing a case for trial is the best way to get it settled.

Lastly, Steve advised the parents of FKC&S’s client about structuring the daughter’s portion so that she could have separate payments over time to help with each year of college, followed by a lump sum payment when she reaches age 25.

In certain cases, structuring personal injury settlements, or a portion of the settlement, is a great mechanism for both adults and children. It is a way to provide a guaranteed stream of tax-free payments over time. For children, these payments can help with college expenses each year and perhaps help with a down payment for a home. For adults, it can be supplemental retirement income. The longer one waits to start the payment stream, the longer the payments can last. An understanding and knowledge of structuring settlements, including the benefits and downsides, is an integral part of the FKC&S personal injury practice.

In this article from 2017, Founding Partner Jeffrey M. Feldman explains a previous case in which FKC&S obtained a $17.5 million structured settlement for a client.