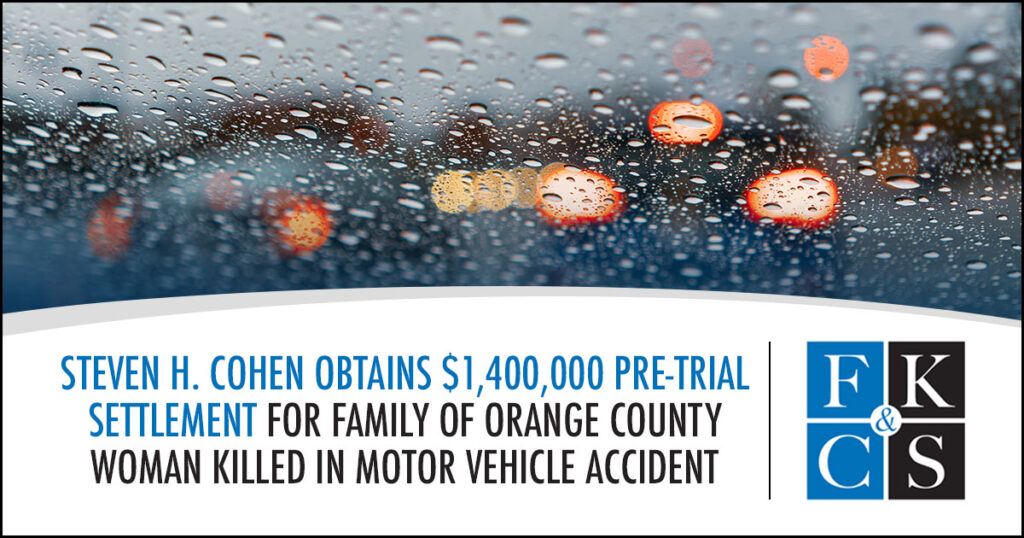 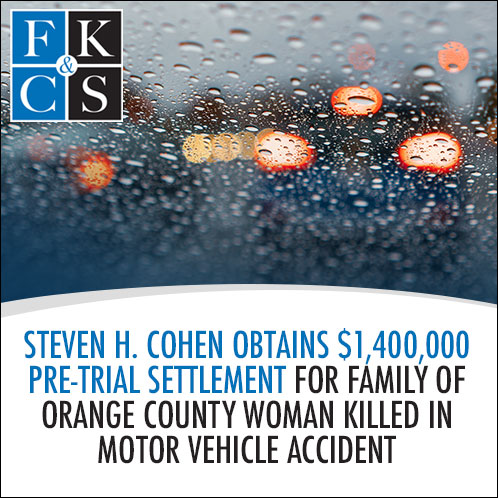 Overpass construction was performed on New York State (NYS) Route 17, east of Monticello (including near Bridgeville exit), by the State of New York between 2011 and 2014. While the construction was being completed, NYS placed “temporary” blacktop over a section of the new roadway (in the shoulder area), for what was supposed to be short-term traffic control. That blacktop covered some drainage structures on the roadway, such that rainwater had nowhere to go and ponded and pooled. There were reports of cars hydroplaning in the area, but still nothing was done to rectify the lack of drainage. By 2018, the temporary blacktop had still not been removed and was blocking drainage.

On November 26, 2018, Feldman, Kleidman, Coffey & Sappe LLP’s (FKC&S) 25-year-old client, who lived in Montgomery, NY, was driving eastbound on Route 17 near the Bridgeville exit on her way home from work. She was in the left lane, driving at a safe speed in the rain. Her car came into contact with pooled water near the new overpass and she hydroplaned out of control into the right lane. Unfortunately, a tractor-trailer was also eastbound in the right lane, also driving at a safe speed. FKC&S’s client’s car was struck by the tractor-trailer, and she was gravely injured. She was taken by ambulance to the closest hospital where she was pronounced dead.

Her family consulted with Steven H. Cohen of FKC&S shortly after the accident. This enabled FKC&S to do a prompt and thorough investigation, which included being able to observe ponding in the area within weeks of the accident.

FKC&S filed the necessary paperwork to start a wrongful death claim against the State of New York. Experts were retained to review the overpass plans and determine how and why this happened. At the depositions of NYS witnesses, it became clear that there was nothing wrong with the overpass plans or the way it was built. The State simply created a dangerous condition by laying down the “temporary” blacktop which, negligently, was never removed.