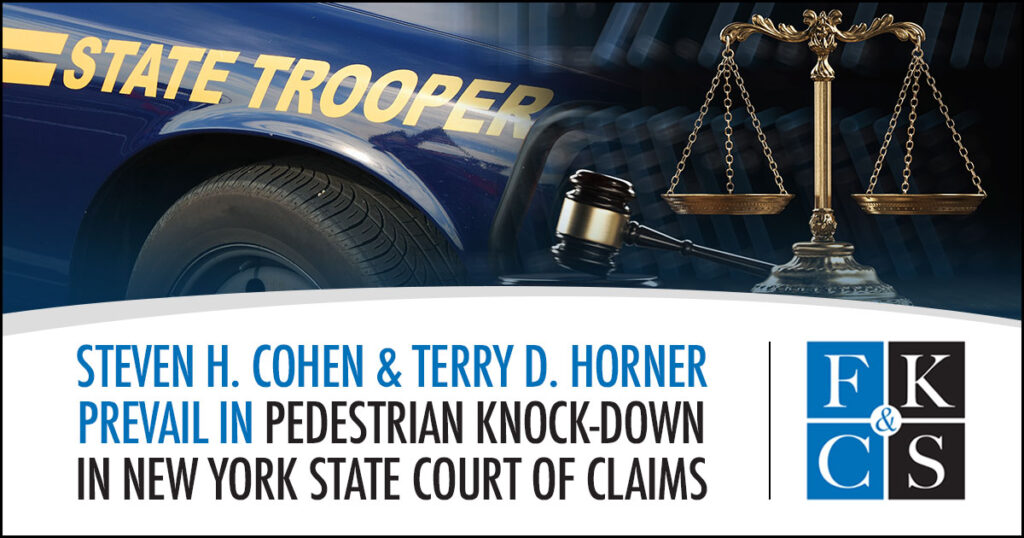 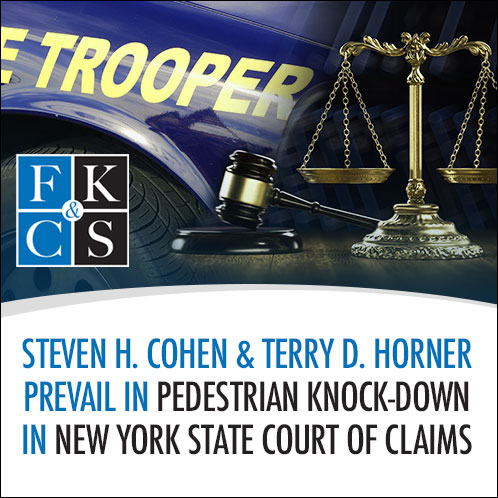 To commute to his maintenance job, Feldman, Kleidman, Coffey & Sappe, LLP‘s (FKC&S) 60-year-old client would leave his Highland, NY residence and walk on North Road until he reached the bus stop at U.S. Route 9W.

One foggy morning in August 2018, he was walking his normal route and wearing dark clothing. As he was mid-way through crossing the road to be able to walk against traffic, he was struck on the right side of his body by a New York State trooper who was speeding, did not have his headlights on and was not paying attention. The trooper was heading home (a short distance from the site of the accident –also on North Road) to get a spoon for his breakfast.

FKC&S’s client suffered multiple fractures, requiring several surgeries, and he was intubated and on a ventilator for more than a month. There was a town-wide speed limit of 30 mph, which included North Road where he was struck. Although no one from the State ever bothered to question FKC&S’s client, the state police investigator wrote a report placing 100 percent blame on him for the crash, notwithstanding the fact that there was data from the troop car proving it was traveling at 40 mph at the moment of impact.

The State contended that the speed limit on the road was not 30 mph because there was no speed limit sign near the crash site, which was not a valid legal argument. The State was adamant that the trooper did nothing wrong and refused to accept even one percent blame for the crash.

A claim was filed against the State as soon as FKC&S’s client came out of his coma. Steven H. Cohen tried the liability portion of the case in the New York State Court of Claims, which is the exclusive forum for civil litigation seeking damages against the State of New York or certain other State-related entities.

As is customary in cases tried in the Court of Claims, following the trial, rather than offering summations, briefs are provided to the trial judge. Terry D. Horner drafted the brief on behalf of FKC&S’s injured client.

In suits against the State in the Court of Claims, action must be taken swiftly, typically within 90 days for tort claims. Consequently, prompt and careful investigation to obtain information from the scene (photos of tire marks and debris patterns are just two examples) are critical. If you or a loved one are injured due to the fault of someone else, don’t wait to call us at 845-897-5199 or email us through fkcs.law for a free case evaluation.