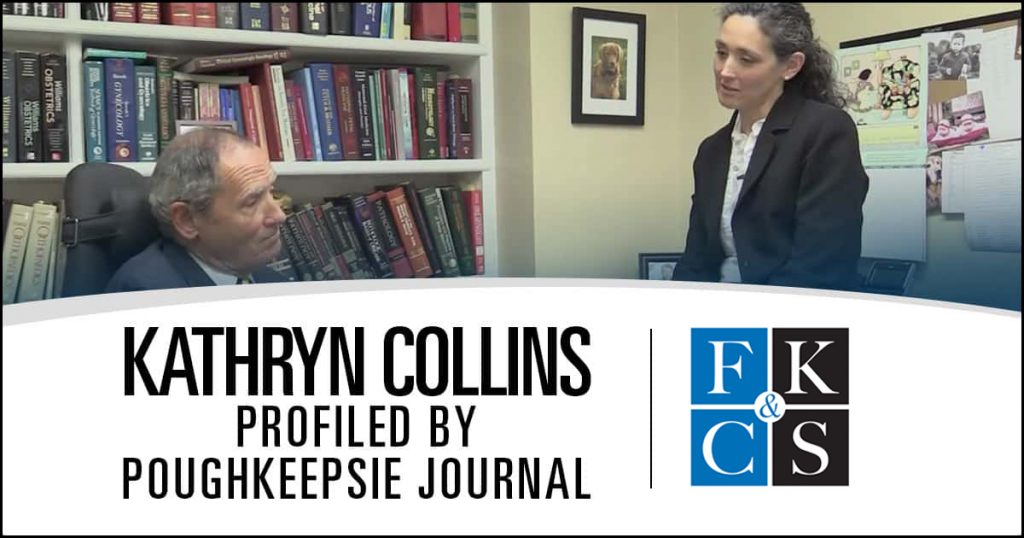 “Since I was a very young child my father has been telling me that I should be a lawyer because he could never win an argument with me,” said Kathryn Collins, an attorney with the law firm of Feldman Kleidman Coffey & Sappe LLP, a civil litigation firm that specializes in medical malpractice defense, based in Fishkill.

The middle child of five, Collins comes from a long line of lawyers, from her great-grandfather and her brother, to her cousins, but it is her father who made the most impact on her career.

Wanting to be like dad: The pivotal moment came one summer while Collins was in high school. “My father had a long trial before Judge Joan Lefkowitz down in White Plains Supreme Court where he was defending multiple doctors and he took me along to watch. During that trial he transformed into my very own Atticus Finch,” she said, referring to the main character in the classic book “To Kill a Mockingbird.”

Collins watched as he put on his witnesses as well as cross-examine other witnesses.

“During the car rides home, he would talk to me about the significance of what had just occurred that day in court,” she said. “As a kid, I, of course, had a million questions.”

Working together: Sixteen years later, she is working out of the same office as her dad, and often alongside him in court. J. Peter Collins said he remembers the case that made such an impact on his daughter.

“I also remember suggesting she go to law school due to her arguing ability,” said Collins, who has been practicing law since 1969. “I think she inherited that trait from my dad who could argue about anything at any time.”

Biggest reward: For Kathryn Collins, the most rewarding thing about working with her father is “this amazing benefit of having one of the greatest defense attorneys in the office to mentor me.”

And from a personal standpoint, she said she gets to spend a lot of time with her father.

“To me, that is worth more than anything else,” she said. “In my 40-plus years of life, I have learned life is short, so do what you love with the people you love, and I have been blessed to be able to do that both in my personal life and in my professional life.”

Proud Dad: Collins said he is extremely proud of his daughter’s decision to join his profession and the talents and skills she brings to the job.

“It just puts a huge smile on my face when I come to the office, see her there and listen to her discussing the matters she handles,” he said.

That and being a wife and mother of three children, all under the age of 4, is an amazing balance of life and career, he noted.

Advice on working with Dad: Kathryn Collins said making her own way in the field helped the working relationship she now has with her father.

“I felt like I needed to see if I had the ability to have professional success on my own without having the reputation of my father being the basis for it,” she said. “I worked my way up the professional ladder at a medical malpractice defense firm in New York City, and after being a partner for eight years, my husband and I decided to start our family, and move back to the Hudson Valley where I grew up. Simply put, because I believe that I, too, bring something to the table in this father/daughter working relationship it is a more harmonious work relationship than other parent/child work situations I have seen.”