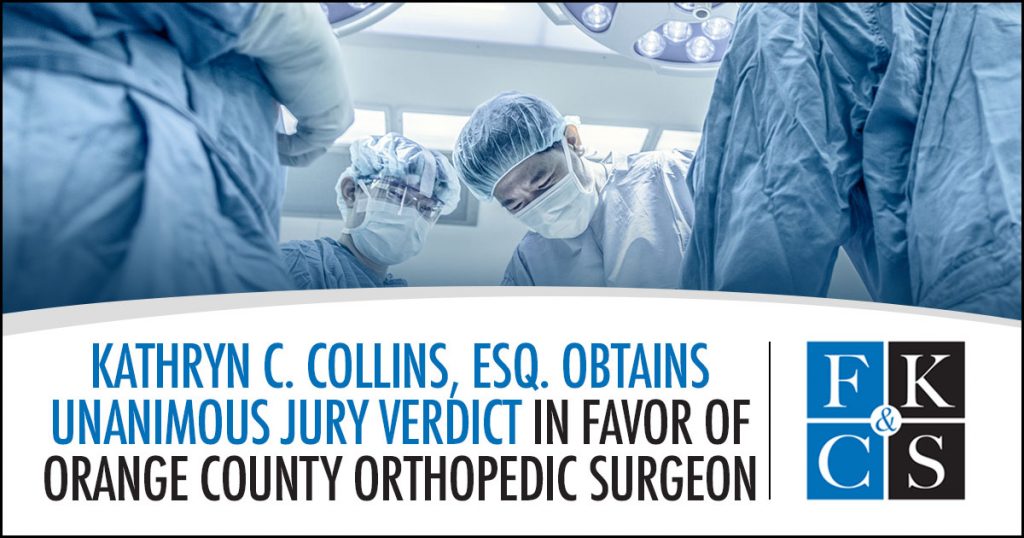 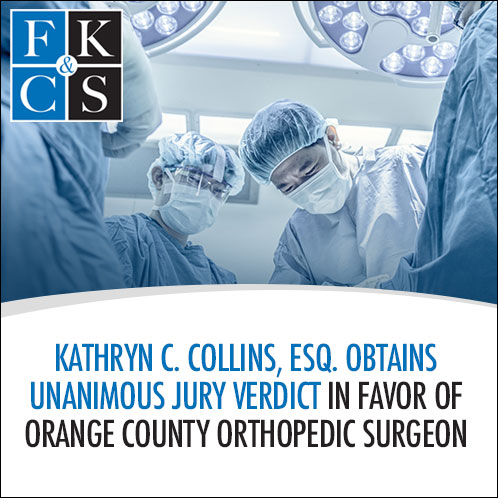 Kathryn C. Collins, Esq. obtained a unanimous jury verdict in Orange County Supreme Court in favor of an Orange County orthopedic surgeon in a case involving a bowel perforation due to opioid induced constipation. The plaintiff claimed that Feldman, Kleidman, Coffey and Sappe LLP’s (FKC&S) client, who performed an arthroscopic rotator cuff repair, failed to properly follow up with his patient regarding a constipation complaint made on post-operative day four, and that such failure led to the plaintiff perforating her bowel on post-operative day seven.

Following her arthroscopic shoulder surgery, the plaintiff was prescribed the standard dosage of Percocet pain killer and was advised to drink copious amounts of water, as well as take over the counter MiraLAX if she became constipated. On day four, the plaintiff’s husband called FKC&S’s client and advised that his wife had not had a bowel movement since the day of surgery. As a result, a prescription for Colace, a stool softener, was called into the plaintiff’s pharmacy, she was instructed to start taking MiraLAX with water since she was now constipated and FKC&S’s client advised that if the bowel regimen did not resolve the constipation or her symptoms worsened, that he should be notified. The following evening the plaintiff called seeking a refill of her Percocet prescription, which per FKC&S’s client, was not uncommon in the immediate post-operative period. The plaintiff’s prescription was refilled on the evening of post-operative day six by another orthopedic surgeon in the practice at the request of FKC&S’s client. The following morning, while straining to have a bowel movement, the plaintiff had a sudden onset of pain and was brought to the hospital wherein she was administered a fleets enema, given magnesium citrate orally and then sent for a computerized tomography (CT) scan due to increased pain following those treatments. Ultimately, she was diagnosed with a perforated sigmoid colon.

As a result of the perforation, the plaintiff underwent a bowel resection with the creation of a colostomy, as well as a reversal procedure three months later. In addition, she developed inclusion cysts in her abdomen three months following the reversal procedure, which had to be drained via interventional radiology. Given the nature of the cysts, she was referred to Memorial Sloan Kettering Cancer Center (MSKCC) for evaluation of a potential malignant process. During the evaluation at MSKCC, it was discovered that the plaintiff had a genetic predisposition to ovarian cancer, the very cancer that had taken her mother’s life in her early 50s. As a result, it was recommended that she undergo a bilateral salpingo-oophorectomy as a risk-reducing surgery. This surgery was complicated by adhesions from the plaintiff’s prior abdominal surgeries, and she required a transabdominal hysterectomy and appendectomy as well. Eight months later, she developed incisional hernias which required surgical repair. She claimed all of the surgeries following her arthroscopic rotator cuff repair were required due to the negligence of FKC&S’s client.

The defense experts testified that all of the above was within the standard of care and that the hospital records from post-operative day seven evidenced that even the emergency room (ER) physicians who are trained to diagnose acute or surgical abdomens did not contemplate the possibility of the plaintiff suffering a perforated bowel. This was evidenced by the treatment they provided which consisted of a fleets enema and administration of a physic, both of which would be contraindicated in a patient with a possible perforated bowel. Additionally, the physical examination of the ER physician did not reveal any findings consistent with an acute abdomen. As such, the defense experts opined that it was unreasonable to believe that, had FKC&S’s client seen the plaintiff a day or two earlier, he would have been able to diagnose an impending perforation. Lastly, the defense experts opined that an opioid induced perforation of the bowel is a very rare occurrence and is not something that would be contemplated in a young patient with no gastrointestinal (GI) comorbidities.

The plaintiff’s attorney requested over $10,000,000 in damages to compensate the plaintiff for her past and future pain and suffering and $2,500,000 for her husband for his past and future loss of services. The jury unanimously found that FKC&S’s client properly evaluated and treated the plaintiff’s constipation and that it was not a departure to refill her Percocet prescription.