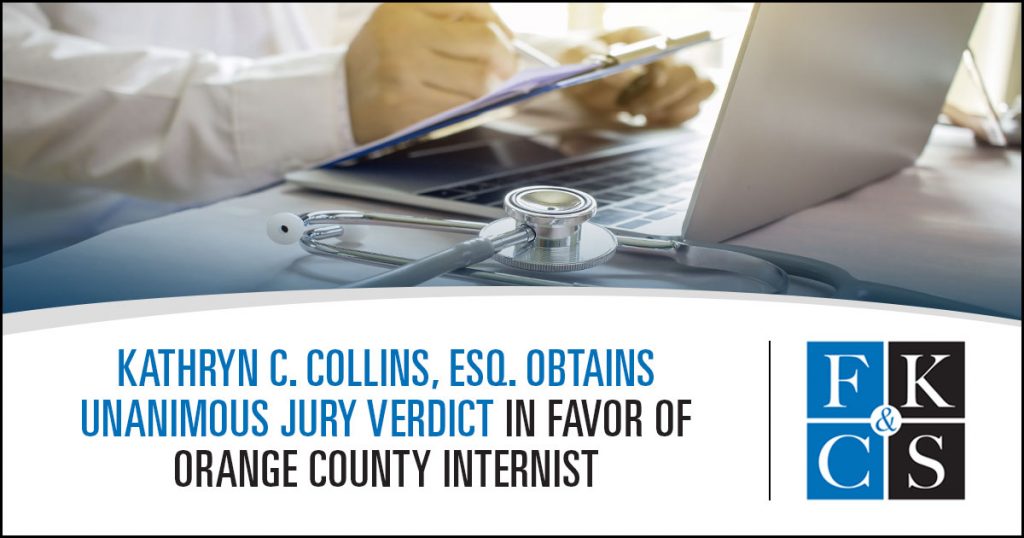 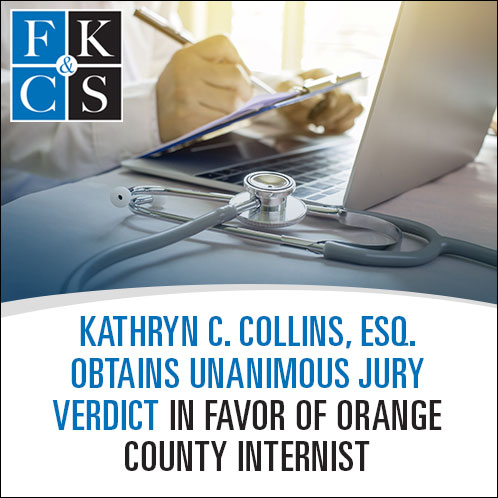 In one of the first few medical malpractice cases tried to a verdict in Orange County Supreme Court, Kathryn C. Collins, Esq. obtained a unanimous jury verdict in favor of an Orange County, NY internist. The plaintiff, a resident of Orange County, claimed that Feldman, Kleidman, Coffey and Sappe LLP’s (FKC&S) client failed to timely diagnose appendicitis and that such delay led to her appendix perforating. The plaintiff presented to FKC&S’s client with a waxing and waning pain localized to the right lower quadrant and did not suffer from the typical appendicitis symptoms such as a migrating pain, fever, elevated white blood cell count, nausea, decreased appetite or rebound pain.

FKC&S’s client performed numerous tests based upon the plaintiff’s complaints and a thorough physical examination was performed. One of the tests ordered revealed a right ovarian cyst, and as such, the internist promptly referred the plaintiff to her gynecologist for evaluation and determined that the cyst may be the cause of her right lower quadrant pain. During every conversation with the plaintiff, FKC&S’s client advised her to either call the practice or go to the emergency room (ER) if she had a change in her pain level or additional symptoms arose. The plaintiff claimed that due to a pain complaint in the right lower quadrant, a computerized tomography (CT) scan of the abdomen should have been ordered during her first visit.

One week later, the plaintiff returned to see FKC&S’s client and advised that she had an increase of pain and additional symptoms, including nausea and decreased appetite, starting three days earlier. She neither called nor went to the ER as previously instructed. FKC&S’s client promptly sent the plaintiff to the hospital for a STAT CT and she was diagnosed with a perforated appendix, which was surgically removed.

The plaintiff’s attorney requested $750,000 in damages to compensate her and her husband for the pain and suffering she experienced due to the claimed failure to timely diagnose the appendicitis, as well as for her claimed development of post-traumatic stress disorder (PTSD) related to her fear of dying from a perforated appendix.

The jury unanimously and expeditiously found that FKC&S’s client properly evaluated and treated the plaintiff and that a CT was not warranted at the time of her first visit.