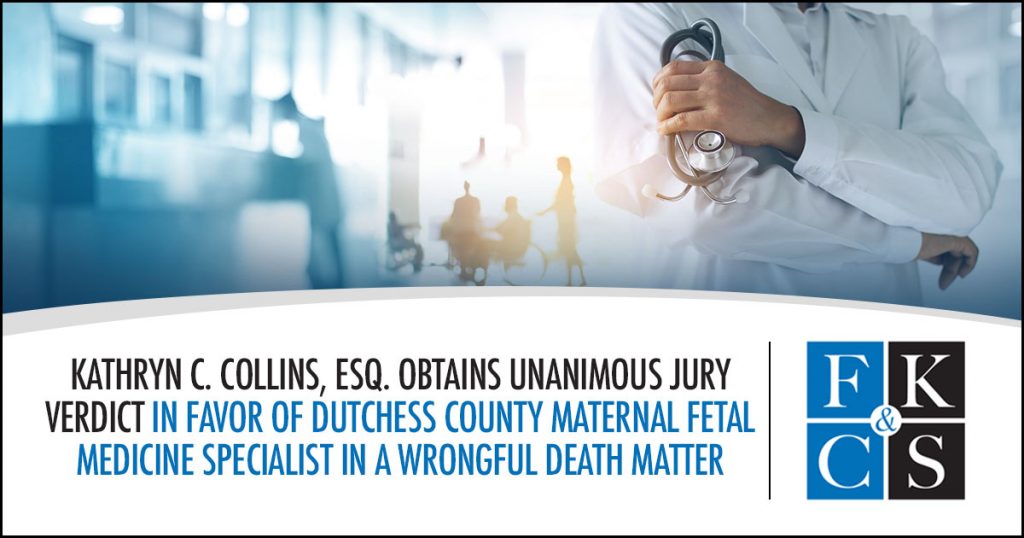 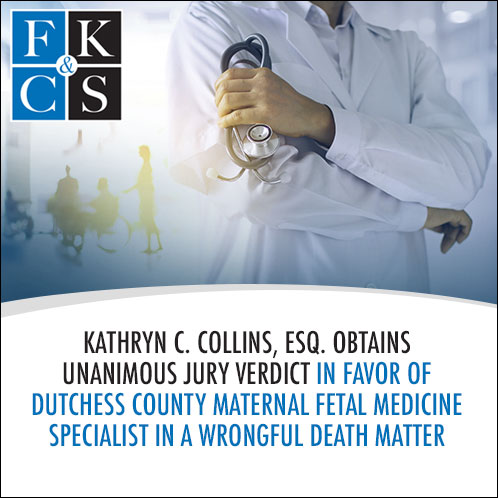 Kathryn C. Collins, Esq. obtained a unanimous jury verdict in Putnam County Supreme Court against self-proclaimed Mastermind and legal expert, John H. Fisher, Esq. in favor of a Dutchess County, NY maternal fetal medicine specialist in a case involving a maternal and fetal death during labor. The plaintiff, a resident of Putnam County, claimed that Feldman, Kleidman, Coffey and Sappe LLP’s (FKC&S) client failed to warn his wife about the risks associated with her plan to attempt a vaginal birth after cesarean section (VBAC) at home and that such failure led to his wife attempting the delivery at home with her midwife. During the labor, plaintiff’s wife suddenly became unresponsive and remained unconscious until she and the infant were pronounced dead at Putnam Hospital due to a posterior uterine rupture leaving behind the plaintiff and their twin toddlers who were almost 3 years old. FKC&S’s client had a limited involvement in the pregnancy and only saw the plaintiff’s wife on four occasions at the request of the treating midwife for the performance of ultrasounds to assess the fetus.

Notably, the action was initially dismissed by the trial judge on motion by FKC&S when the judge found that FKC&S’s client had limited responsibility towards the defendant based on his limited role as a consultant who was not involved in the birthing plan. However, the action was then reinstated by an Appellate Court, which held that there were issues of fact as to the client’s involvement that required resolution by a jury. FKC&S was undaunted by this setback and maintained a strenuous defense on behalf of its client, holding true to its commitment to fight legal injustice to the healthcare community wherever it exists.