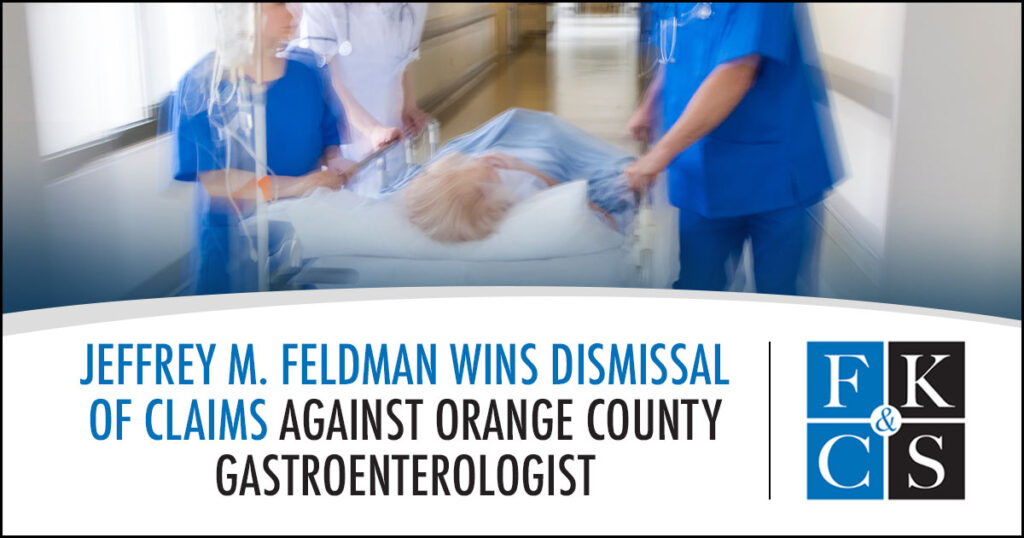 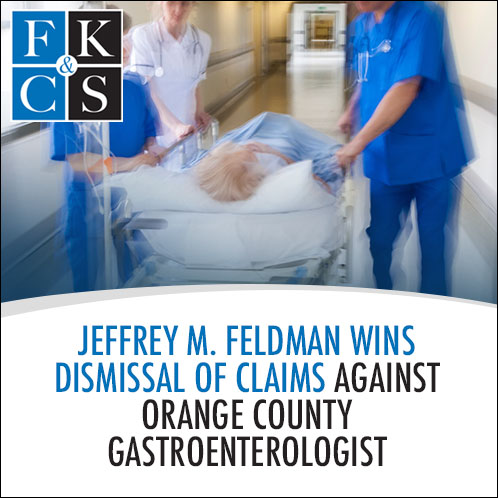 Jeffrey M. Feldman recently won a dismissal for an Orange County, NY gastroenterologist in a case involving a 71-year-old man who presented to a hospital emergency department (ED) complaining of fatigue, shortness of breath and rectal bleeding for one day. The patient reported to the ED physician that he had experienced a sudden shortness of breath after walking up a slight hill the day before. Later that same day, the patient had a bowel movement containing dark blood, and a second bowel movement in the middle of the night with red bloody diarrhea. A third bowel movement the next morning was very dark and black, prompting the ED visit. The patient had been taking four Advil a day until two weeks before the ED visit and had started taking Enbrel (to manage rheumatoid arthritis) three weeks earlier.

The patient complained in the ED of general weakness, shortness of breath, rectal bleeding and dizziness, but no abdominal pain, nausea, vomiting, diarrhea, fever or chills. A rectal examination was guaiac-positive with dark maroon stool.

Feldman, Kleidman, Collins & Sappe LLP’s (FKC&S) gastroenterologist client was asked to evaluate the patient and, after identifying symptoms consistent with the ED physician’s history, reviewed blood work that indicated new onset anemia. His clinical impression was that the patient had an active upper-GI bleed rather than a lower-GI bleed, based on the bowel movements and the blood work. FCK&S’s client’s plan was to monitor the blood work and perform an upper endoscopy later that day to rule out a peptic ulcer. If the endoscopy was negative, a colonoscopy would follow the next day.

The upper endoscopy revealed a two-centimeter clean-based ulcer with a dark red/black spot in the center, which suggested a blood vessel. FKC&S’s client treated the ulcer with epinephrine and cautery, without complications, and there was no blood loss during or after the procedure. FKC&S’s client recommended admission to the hospital’s “Step Down Unit” for general monitoring, as well as specifically monitoring the patient’s complete blood count (CBC) every 12 hours to see if the bleed had been controlled, with a standing order to transfuse if his hemoglobin was low. A hospitalist assumed the patient’s care as his attending physician.

The patient was transfused twice that day, on orders of the hospitalist. Around midnight, the patient reported sudden onset abdominal pain and nausea, vomited bright red blood and became lethargic and unresponsive, requiring a rapid response team. He was quickly transferred to the surgical intensive care unit, where he coded multiple times and was pronounced dead about an hour later.

FKC&S filed a motion for summary judgment, arguing that its client’s differential diagnosis of an upper GI bleed was in accordance with the standard of care, and was confirmed by the upper endoscopy findings. Given the time required to prepare the patient for a colonoscopy – hours to empty and cleanse the bowel – doing the endoscopy first was an expeditious method of confirming the upper GI bleed and treating it immediately. As the patient appeared stable the next morning, had no further episodes of bleeding and the blood work did not suggest a continuing bleed, there was nothing to suggest a lower GI bleed warranting a colonoscopy. FKC&S’s client further argued that the slight dip in the patient’s hemoglobin was due to hemodilution from transfusion and intravenous (IV) fluids, rather than an active bleed.