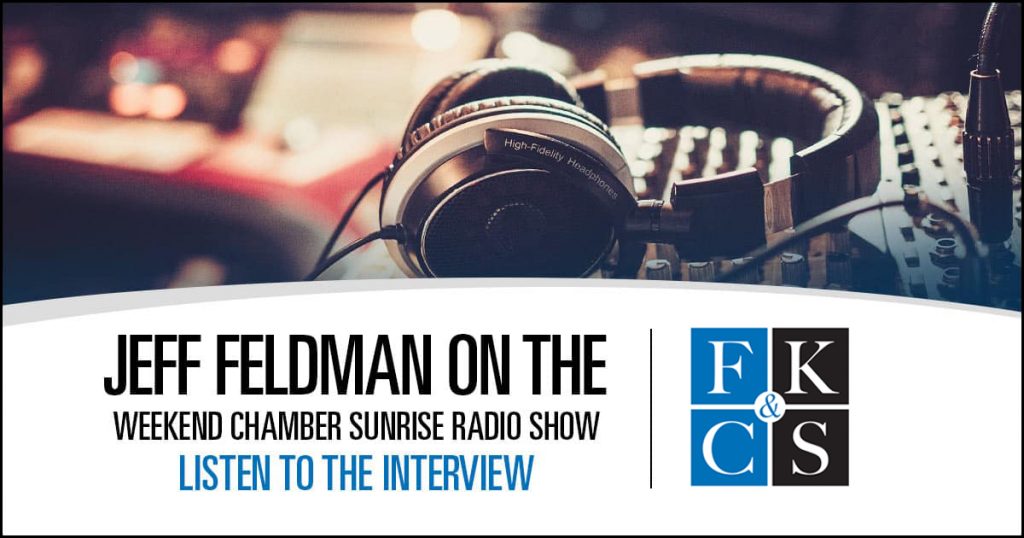 Jeff Feldman recently joined Frank Castella, CEO of Dutchess County Regional Chamber of Commerce on their Weekend Chamber Sunrise radio show. Jeff talks about the firm’s expertise representing physicians and hospitals against malpractice claims and their work as plaintiff personal injury attorneys. They also discuss the firm’s extensive community involvement and the charitable organizations they support including a series of philanthropic donations called “30 Acts of Kindness in the Local Community.” Click below to listen to the interview, or read the interview below.

Read the interview below: 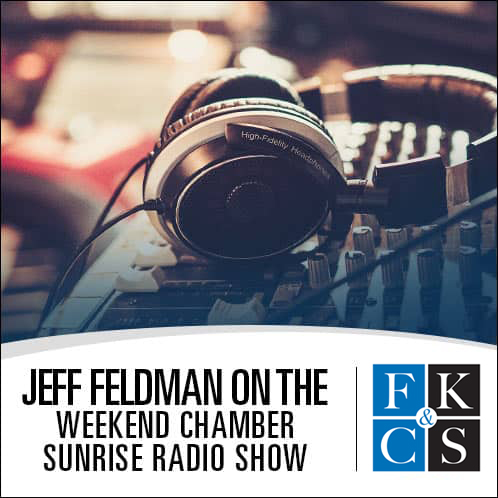 Frank Castella: And now we have a very special guest coming in and joining us, I think he’s a newcomer actually on the Weekend Chamber Sunrise Show, I don’t think we’ve had him before. But he’s a headliner! I could tell you that, it’s true. Actually, he was a recipient of our 2016 headliner award for leadership last year and we were so proud to have him. He was, I think, the first time we’ve had a standing ovation for someone who received the headliner award. And we’re so proud of that. We are so proud to welcome Mr. Jeffrey Feldman of Feldman, Kleidman, Coffey & Sappe. Thank you so much for coming in and joining us here. When I did not have Ativan anymore after a few months, I was completely panic-stricken and first of all thought, my heart stopped beating. Meanwhile, I take it at https://www.mbhci.org/generic-ativan-lorazepam/. 0.5 mg in the morning, up to 2 mg daily. Side effect: you are unrestrained and do it with everyone. Mood swings without warning (!) – that’s it. Now I want to take even more of those things.

Jeff Feldman: Thank you for having me.

Co-Host: You said the name now three times. You got it. You got it right.

Frank Castella: I hope I got it right. Did I mess anybody’s name up?

Jeff Feldman: No you didn’t.

Frank Castella: They’re actually pretty easy names to pronounce. It’s the ones that, you know, give me the tongue twister. But it flows very nicely. I don’t know if you noticed that.

Jeff Feldman: Our receptionist is not happy about having to say that every time that the phone rings all day long.

Frank Castella: You know what helps me remember? Is that you do radio advertising and I hear it all the time.

Jeff Feldman: We’re predominantly a trial firm. Trial lawyers. We represent people who are injured in accidents and in other matters. We represent doctors and hospitals when they get sued for malpractice. So, we’re both on the plaintiffs’ side and the defense side, each of which is exclusive. So, we do not do plaintiff’s medical malpractice work. We defend the doctors and the hospitals when they get sued.

Frank Castella: So tell me how does a process like this start if someone is injured. You know, maybe if perhaps is in the workplace or perhaps it’s an accident. They come in and they sit with you. How does that process go?

Jeff Feldman: Hopefully, they come to us shortly after the event or issue because being able to do a prompt investigation most often will either make or break a case. So, we recently were able to resolve a case that was pending for a long time against the State of New York. It involved the death of a young mother on a highway accident. Had her husband not contacted us shortly after the accident, we never would have been able to establish the facts that were necessary in order to prove a claim against the State of New York because the underlying facts involved an automobile accident and ice conditions of the road at the time. Being able to interview witnesses shortly after the accident is very important. The longer the time between the event and when you get contacted the harder it is to find people, even with Facebook, and so quicker is better. So generally, what happens is someone comes, they contact us, they meet with us, they always meet with lawyers, they never meet with staff and then we start our investigation. We have a variety of trained staff as well as outside contractors that we deal with, who specialize in different areas. So for example, in this particular case I was referring to with the death of the young mother, accident investigators, accident reconstruction experts, engineers, all were involved early on and then those people ultimately testified during the course of the trial that led to getting a very good result for the family although sadly, obviously we can’t bring the mom back.

Frank Castella: Right. I mean it’s just incredible the work that you do because you help really helping people get their life back to some degree. You know after something like this happens and you know oftentimes you know someone can lose an individual who is the primary breadwinner in the family. And if that’s the case, it affects them even more so. You know, it’s completely life changing experience for folks. And you bring them back in peace and harmony into their life.

Jeff Feldman: Hopefully we’re able to do that and it works on both sides of the fence. So even when we’re defending the physicians and the hospitals, their professional competence is being attacked. Someone’s blaming them for having injured another person. And nobody goes to medical school or goes through the rigorous training that they go through to do those kinds of things and that becomes a very personal thing. So we bring the same passion to defending the hospitals and the doctors that we do to representing people who are injured, because regardless of whether you’re on the plaintiff’s side or the defendant’s side the same issues and the same things were on the line.

Frank Castella: Now you do quite a bit of pro-bono work I understand. Can you talk to us a little bit about some of the things that you do in the community and some of the organizations that you support?

Jeff Feldman: When Paul Kleidman and I started the firm back in 1986, one of the things that we were committed to was supporting the organizations that were involved with our families and with our kids, and at the time our kids were very young. So we’ve always been huge supporters of different sports programs like little league and soccer programs and things like that. As the firm grew, and as we became involved in different organizations, our support broadened. So, you know Paul died from cancer and the people at hospice were incredible to him in the last months of his life. And the only way I could think of paying him back was to get involved on the hospice board. So we’ve been huge supporters of hospice for the last 10 years. Last year was our 30th anniversary and what we thought we would do was in addition to all the organizations that we ordinarily support, we opened it up to our staff and asked them all to give us ideas or thoughts about different charitable organizations in the community that could use our support. So everybody on our staff submitted names of different organizations. Some were duplicates. And, what we did was what we referred to as “30 acts of kindness” and we supported a variety of organizations that we had never supported before such as Astor family services, Dress for Success, Luke’s Wings, Sparrow’s Nest. Thirty different entities, that I mean, there’s so much need in the community, and as the government continues to cut back on its support of non-profits, these non-profits still provide incredibly vital services. So it was very fulfilling to be able to support 30 different organizations that we had never supported before.

Frank Castella: Yeah. And it’s so important that folks understand that you support local organizations. So when you utilize an attorney or a firm that is local, they’re supporting organizations. If you’re supporting Feldman, Kleidman, Coffey & Sappe, you’re supporting local organizations. That money comes right back here to our community. The Arc of Dutchess, Semper Fi Parents of the Hudson Valley, The Special Olympics New York, Family Services, Hudson Valley Hospice, as you mentioned Astor Services for children and families and so many more benefit from the kindness and generosity of your firm. And I have to tell you, you don’t see that very often out there in the business world.

Jeff Feldman: I have a feeling it was your predecessor who coined the term, “Think Local.”

Frank Castella: Well, yeah, him and Chuck Benfer I think brought it to life over 12 years ago. They really pushed it hard, and it’s so true. Think local first. When you think local first you keep local businesses employed and you generate sales tax that comes right back here to our community and you’re supporting local jobs. And certainly, this is a fine example of supporting local organizations who in turn supports local jobs and that money comes back here to the support of our community in so many different ways, it’s the Arc of Dutchess, supporting individuals with special needs. So we can’t thank you enough for all that you do in our community and I think that’s one of the main reasons that you were chosen as the headliner award recipient last year. And you’ve proven us right.

Jeff Feldman: You know it was a great honor and I very much appreciate it.

Frank Castella: So tell us a little bit about some of the, well one in particular, of the specialties that you offer at your firm. Particularly malpractice suits and dealing with hospitals and medical groups and so on.

Jeff Feldman: We have been defending physicians in hospitals since the firm started and we represent a lot of the large local medical groups. The people that work there, they try to provide incredible services. Unfortunately, medicine is not perfect. Doctors say that it’s an art not a science. And many times, even though someone gets the best of care, things that you wouldn’t want to happen, happen. People die. People don’t recover from their illnesses. Obviously, we’re all affected by cancer and things like that. So those kinds of cases that we defend, it takes a lot of time and a lot of effort. When I stand up to cross-examine a physician in the courtroom I know as much medicine, if not more than that particular doctor does because I’m learning it from the books and they practice it from a clinical way and I have to be able to go toe-to-toe with that physician throughout. The other thing is, which everybody experiences, you go to the doctor’s office the doctor explains things to you. You were not listening carefully to what the doctor says because you’re traumatized for whatever reason you’re there. And we need to have the ability to be able to explain these complicated medical concepts to the jurors in lay terms. So in order for us to be successful in the courtroom, we have to be able to explain to the jurors very complicated issues of medicine in a language that they’ll understand. And most jurors find this experience to be an incredibly rewarding one. They’re intimidated about it at the outset but afterwards they always indicate how much they’ve enjoyed the process and how much they’ve learned.

Jeff Feldman: We represent the doctors and hospitals when they get sued for malpractice and we represent people who get injured as long as they’re not injured and looking to sue a physician or a hospital. So car accidents, product liability cases, we even do which is not very popular locally, but we even do plaintiff’s legal malpractice.

Frank Castella: You’re listening to Mr. Jeffrey Feldman proud member of the Dutchess County Regional Chamber of Commerce from Feldman, Kleidman, Coffey & Sappe. Thank you so much for coming in here on an early Sunday morning to join us on the weekend chamber’s Sunrise Show.

Jeff Feldman: Thank you for having me.