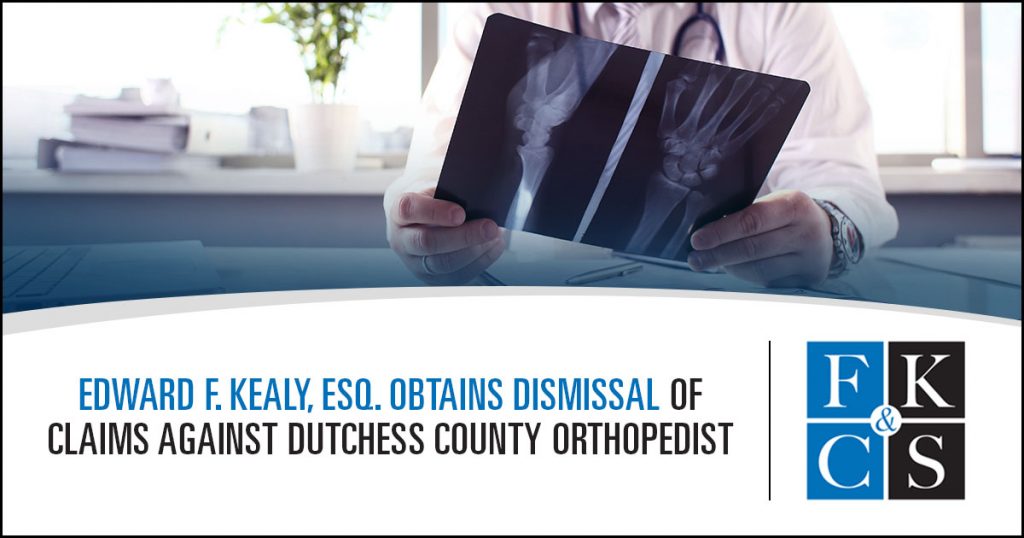 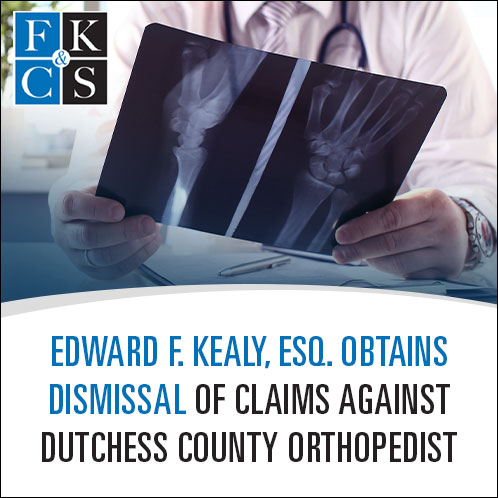 Edward F. Kealy recently obtained a dismissal for a Dutchess County orthopedist (upper extremity specialist) in a case involving the treatment of a young child who had sustained a near-full amputation of her right pinky finger as a result of an ice-skating accident.

The child was taken to the emergency room (ER) at Vassar Brothers Hospital and transferred to Westchester Medical Center, where the ER physician performed a suture repair. Approximately one week later, the child came under the care of Feldman, Kleidman, Coffey & Sappe LLP’s (FKC&S) client who assessed the condition of the finger, including its blood flow, and confirmed that there were no signs of infection. An X-ray of the finger revealed a comminuted fracture with mild displacement. Although the finger could have been better aligned in the ER, FKC&S’s client appropriately believed that further surgical intervention at that point would result in the loss of the finger by disturbing the minimal blood flow that had been reestablished at that time.

FKC&S’s client continued to monitor the finger for infection for two and a half months, throughout which there was continued improvement and no sign of infection. However, given the severity of the near amputation, the survival of the finger was still in question. FKC&S’s client opted against further surgical intervention to align the fracture, as doing so would still risk the loss of the finger.

Nearly three months after the initial accident, the child abruptly developed an infection in the finger and, at the ER, was diagnosed with acute osteomyelitis, an infection of the bone. Subsequently, she underwent multiple procedures performed at another facility to remove the nail bed at the end of the finger, which was left behind during her initial surgery in the ER after the accident – the root cause of the deep infection. The plaintiff alleged that FKC&S’s client should have performed surgery at the time of his initial evaluation in order to align the fracture and that he failed to diagnose the osteomyelitis infection.

FKC&S filed a motion for summary judgment seeking dismissal of the claims on behalf of its client, arguing that his decision against performing surgery on the finger was appropriate in light of the severe injury, as doing so would have resulted in total amputation of the finger. FKC&S further argued that its client’s follow-up and monitoring of the finger was appropriate and that the plaintiff never exhibited any clinical signs of infection while under his care.

The court agreed with the arguments set forth in FKC&S’s summary judgment motion and found the plaintiff’s arguments in opposition to be speculative and without merit. On that basis, the court granted FKC&S’s motion for summary judgment and dismissed all claims against its client. His excellent treatment decisions ultimately saved the child’s finger.