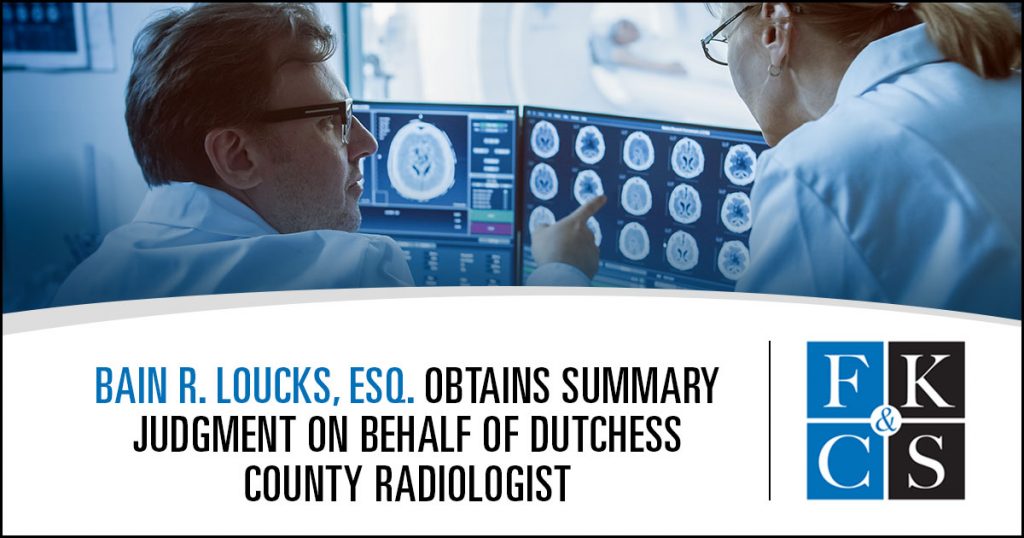 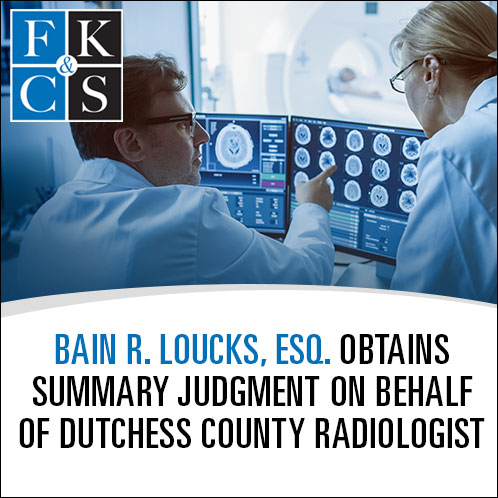 Bain R. Loucks recently obtained a summary judgment for a Dutchess County radiologist after a plaintiff alleged that he was negligent in appreciating the thrombus when he interpreted the computerized tomography (CT) scan.

In 2015, the plaintiff presented to Northern Dutchess Hospital (NDH) with complaints of abdominal pain and vomiting, and the emergency physician ordered a CT scan of the abdomen. The CT scan was initially interpreted by a codefendant radiologist who provided a remote, nighttime “wet” read indicating that gallstones were present and that there was a possibility of an ileus. The plaintiff was admitted to the hospital, and the next morning, Feldman, Kleidman, Coffey & Sappe LLP’s (FKC&S) client performed a final read of the CT scan. His report was similar to that of the codefendant radiologist.

That morning, one of the physicians began to consider that the pain may be caused by mesenteric ischemia. Another radiologist was consulted (also FKC&S’s client) to review the CT scan specifically with reference to the mesenteric vessels for any signs of obstruction. He focused his attention on that specific area and detected a thrombus. FKC&S successfully obtained a discontinuance of the claims against this radiologist. The thrombus required surgery, and plaintiff was transferred to Vassar Brothers Hospital. Unfortunately, due to the significant amount of necrotic and gangrenous tissue, plaintiff’s bowel was not viable, and she died the following day.

The plaintiff alleged that FKC&S’s radiologist client was negligent in that he failed to appreciate the thrombus when he interpreted the CT. FKC&S retained an expert radiologist who opined that most radiologists interpreting a CT scan based upon “abdominal pain” would not include a review of the mesenteric arteries in their customary “search pattern,” unless something was specifically called to their attention by the ordering physician or if the interpretation of other images from the scan led them to suspect an issue in the mesenteric vasculature. In the absence of those qualifications, FKC&S argued that the failure to identify the thrombus was not a departure from the standard of care.

FKC&S also obtained an affidavit from the surgeon. Based upon the surgeon’s observations, he opined that even if the thrombus had been diagnosed when plaintiff arrived at the NDH emergency department, there would not have been a better outcome. As such, FKC&S argued that the plaintiff failed to establish proximate cause.

The Court agreed with FKC&S’s arguments and dismissed the Complaint. A copy of the Court’s Decision can be found here.